Nine times Moses went to the Egyptian Pharaoh Ramses II to demand freedom for the Israelites in captivity, saying “Let my people go.” Each time Moses and his brother Aaron were sent a way, an episode classified by the Index as, Moses and Aaron: driven from Pharaoh’s Presence. Despite these increasingly tense exchanges, and then a marvelous act that changed Aaron’s rod into a serpent before the Pharaoh’s court (Moses: Miracle of Rod changed to Serpent), Ramses still refused to release the Israelites from slavery.

What followed was the foretold wrath of God enacted as ten crippling plagues on the Egyptians. In the first wave of calamities, there were plagues of blood, frogs, gnats, and lice that polluted the air and water. The second wave, brought plagues of flies, diseased livestock, and boils. Then came hail, locusts, and darkness that fell on Egypt for three days. The tenth and final plague, the “Plague of the Firstborn,” claimed the lives of the eldest children in all Egyptian families. The Index of Christian Art classifies the subjects of the Exodus plagues under the major figure of Moses:

Facing the impending deadly plague, Moses instructs the Israelites to make a sacrificial offering to God, and to use the blood of the animal – a male yearling – to mark the doorposts and lintels of their homes. Moses explains to them that marking their homes this way will spare their firstborn children from the “death angel,” saying he “will pass over the door.” (Exodus 12:23).

Moses: Plague of Firstborn. Two Israelites marking the doorposts and lintels of their homes with the blood of the sacrificial lamb. History Bible, Paris, c. 1390. Morgan Library, M.526, fol. 14v

Following this, the Israelites were delivered from bondage and departed from Egypt. The Exodus is remembered at the feast of Passover – the Hebrew feast of Pesach – with special instructions for preparing, eating, and storing traditional, often symbolic food. While Passover traditions have varied over time and from one region to another, it is generally a family holiday in which the meal is accompanied by readings, songs, and traditional rituals designed to remind the celebrants of the Exodus story and the hopes for a rebuilt Temple in Jerusalem. The order of the seder, or Passover meal, is set out in a book known as the Haggadah, which was sometimes richly illuminated in the Middle Ages, as shown here in the Sarajevo Haggadah, originating in Barcelona in the middle of the 14th century.  Well-known related manuscripts to this Haggadah include the Rylands Haggadah and the Simeon Haggadah. The Index classifies subjects depicting the original Passover feast as Moses: Passover, Moses: Passover proclaimed, and Moses: Law, Feast of Passover and with a general heading for Scene: Passover.

The middle of April strikes dread (or joy) in the hearts of millions of tax filers.  Since 1955, April 15 has typically marked the end of the tax season in the continental US.  This year, however, filers have received a three-day reprieve to accommodate Emancipation Day in Washington D.C, which is observed on the weekday closest to April 16 when it falls on a weekend.

Saint Matthew is among the best-known tax collectors in the history of Christian art.  According to the gospel accounts, Jesus encountered Levi (Matthew’s name before his conversion) in the custom house of Capernaum on the northern shore of the Sea of Galilee.  Jesus said to him, “Follow me,” and Matthew obeyed.

A remarkable depiction of Christ calling Matthew appears in the Picture Book of Madame Marie, a thirteenth–century French devotional manuscript now at the Bibliothèque nationale de France in Paris.  The scene takes place beneath sharply-cusped arches and against a fiery background.  Wearing a brilliant blue garment and purple cloak, Christ addresses Matthew, whose money table has been dramatically tilted to reveal neat piles of gold and silver coins.  Thematically related is a fifth-century gold solidus of Pulcheria with the empress wearing an elaborate coiffure and lavish jewels, a macabre Dance of Death featuring a money-changer from a fifteenth century French Book of Hours, and a regal image of the Queen of Coins on a fifteenth-century Italian tarot card.

May the rocks in your field turn to gold!

From the Director: Survey Results and Future Plans 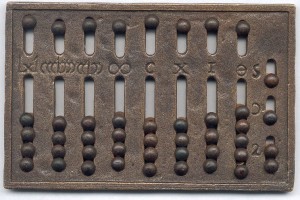 Heartfelt thanks to the over 150 people who took our online survey this past month. Your thoughtful, detailed responses will be central to our plans for the coming year. They confirmed many concerns already on the mind of Index staff, especially concerning the difficulties of navigating our current database. They resolved a few hot office debates over how researchers approach the system (Team “Keyword Search” routed Team “Browse List,” 93-7, while “Search by Subject” ran away with “Initial Search Field,” earning 87% of responses). They also offered high marks for the accuracy of our data and the quality of our programs and publications. Most appreciated of all, however, were your concrete, insightful suggestions about how the new database could be designed so as to perform most effectively for an evolving scholarly community.

Three issues emerged repeatedly in the survey results. First was navigation: many researchers reported difficulty using the online database because of outdated or unwieldy design, unfamiliar terminology, and a lack of research guidelines. Close behind this was cost: past subscription fees for the Index have been high enough to make access difficult for smaller institutions and individuals. Finally, many researchers expressed concern about access to and quality of images: not only did past policies at the Index restrict many images from view by remote users, but the quality of our older images (some nearly a century old) can be quite low.

We hear you, and we are happy to say that most of these issues should be mitigated as we move to a new database design over the next two years. We are currently engaged in selecting a vendor to create the new system, which will be more intuitive, researcher-oriented, and image-centered than the original 25-year-old design. We also expect it to be more efficient, allowing us to migrate existing data and integrate new material, including improved images, with greater speed and effectiveness, while nationally changing practices surrounding copyright and fair use will allow us to make more of those images available universally. Finally, once a vendor is selected and the database is in design, we will address the question of subscription costs with our advisory committee, with the goal of offering more affordable access to the database for both institutions and individuals, including independent scholars and students.

We look forward to sharing news of all the changes to come at the Index as we approach our 100th year, and as always, we look forward to hearing from you when our resources or research staff can be of help to your work.