Did You Know? Patron Edition 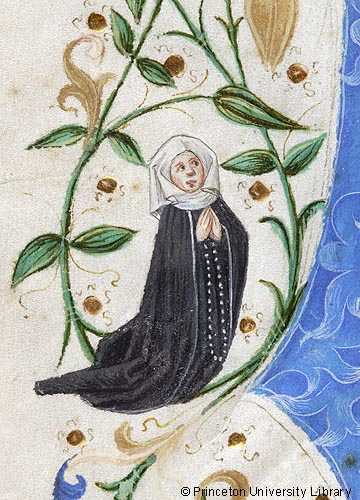 Female donor in the margin of a 15th century Missal (Princeton University Library, Kane 44, no. 1).

Did you know that you can search The Index of Medieval Art for information about patrons of medieval art? The Index records both identified and unidentified patrons, the latter entered as grouping terms for types of patrons (Male, Female, Couple) and major monastic orders, such as Augustinian, Benedictine, and Carmelite. There are also general headings for anonymous male and female patrons (Male, unidentified and Female, unidentified). Names of churches, monasteries, and abbeys are given by their proper titles, such as Canterbury Cathedral, but might be further identified by location (e.g. Abbaye d’Anchin [Pecquencourt, France]).

For an overview of our patron headings, click on Browse at the top of the Index landing page. This will bring you to a list of over 900 names and grouping terms sorted in alphabetical order. To reach a specific entry, type the first few letters of a name into the search line at the top of the list. For instance, typing in “Blanche” will bring you to all Blanches from Burgundy, Castile, France, Navarre, and also the late 14th-century Countess of Geneva. Clicking on any patron heading will return a glossary entry comprising a biographical note with dates, alternate names of the patron, a bibliographic citation, an external reference for the authority source, and all the work of art examples linked to that patron. 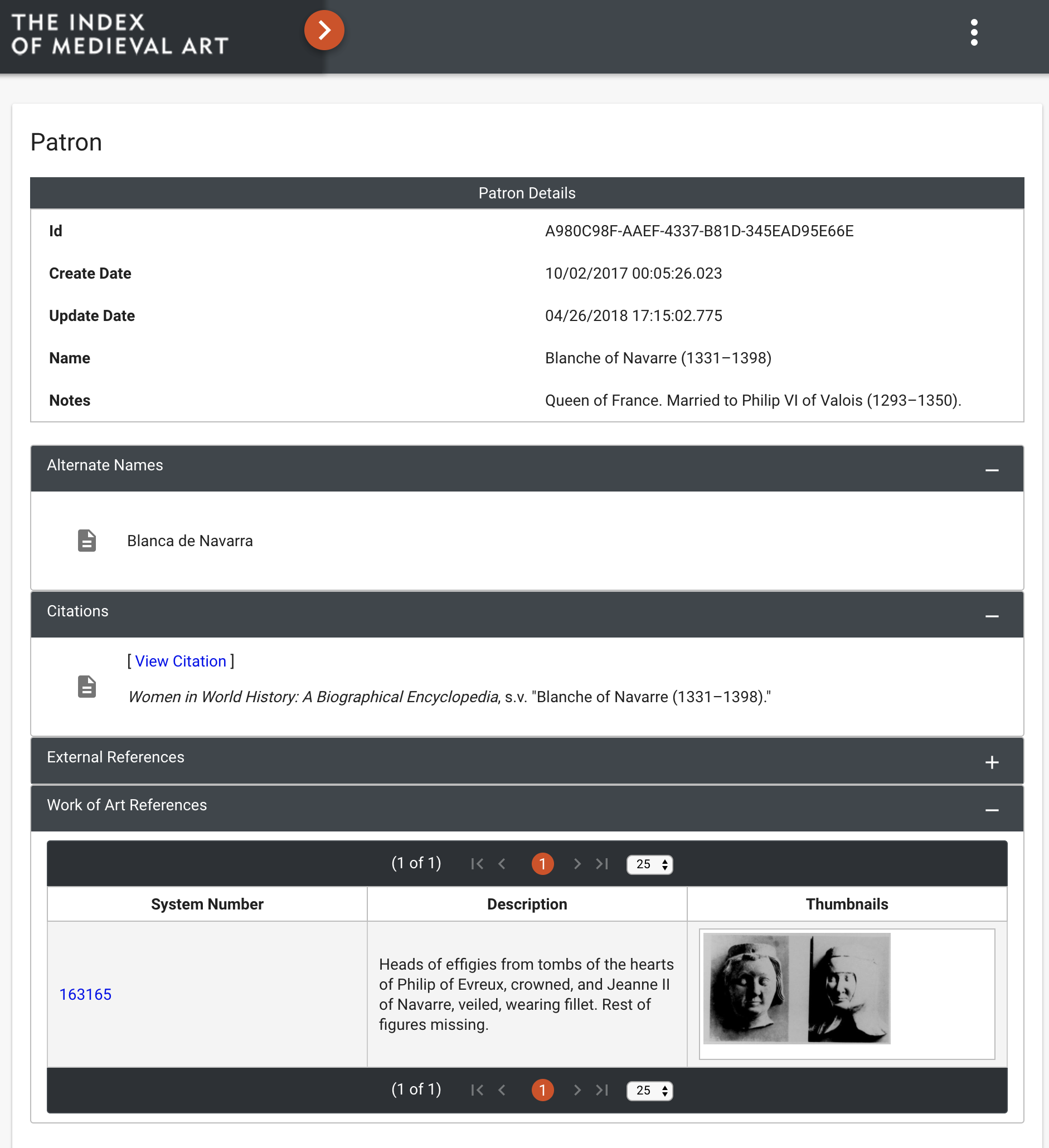 Our patron entries are formatted in keeping with standard biographical authorities, such as the Library of Congress Name Authority File, the Virtual International Authority File (VIAF), and Oxford References. Patrons are identified in the Index database by their roles and dates when these are known. When performing an Advanced Search in the “Terms” screen, you may prefer to keep the Match Type set to “Default,” which will search all parts of the heading. In the “Terms” window, a search can be formulated with keywords such as “Pope,” “Doge,” or “Prince,” using “Patron” in Search Fields to locate medieval patrons by their role. Similar keywords, along with keywords for place indicators like “Monastery” or “Convent,” can be searched against the “Patron Note” field, which will search the biographical notes in the patron glossary.

Many of the monastic patrons contain their locations in parentheses after the name of the community, so countries of patronage activity can also be searched as keywords. For instance, searching against “Patron” or “Patron Notes” with the keyword “Italy” returns over 150 records. This indicates artwork results for a patron who was active in Italy. From here, in the “Filters” window, the Date Slider can be used to refine results. The “Terms” search can be refined with any of the additional filters, including “Location,” “Medium,” “Style/ Culture,” and “Work of Art Type.”

Are you interested in finding out which female patrons were active in France in the 14th century? 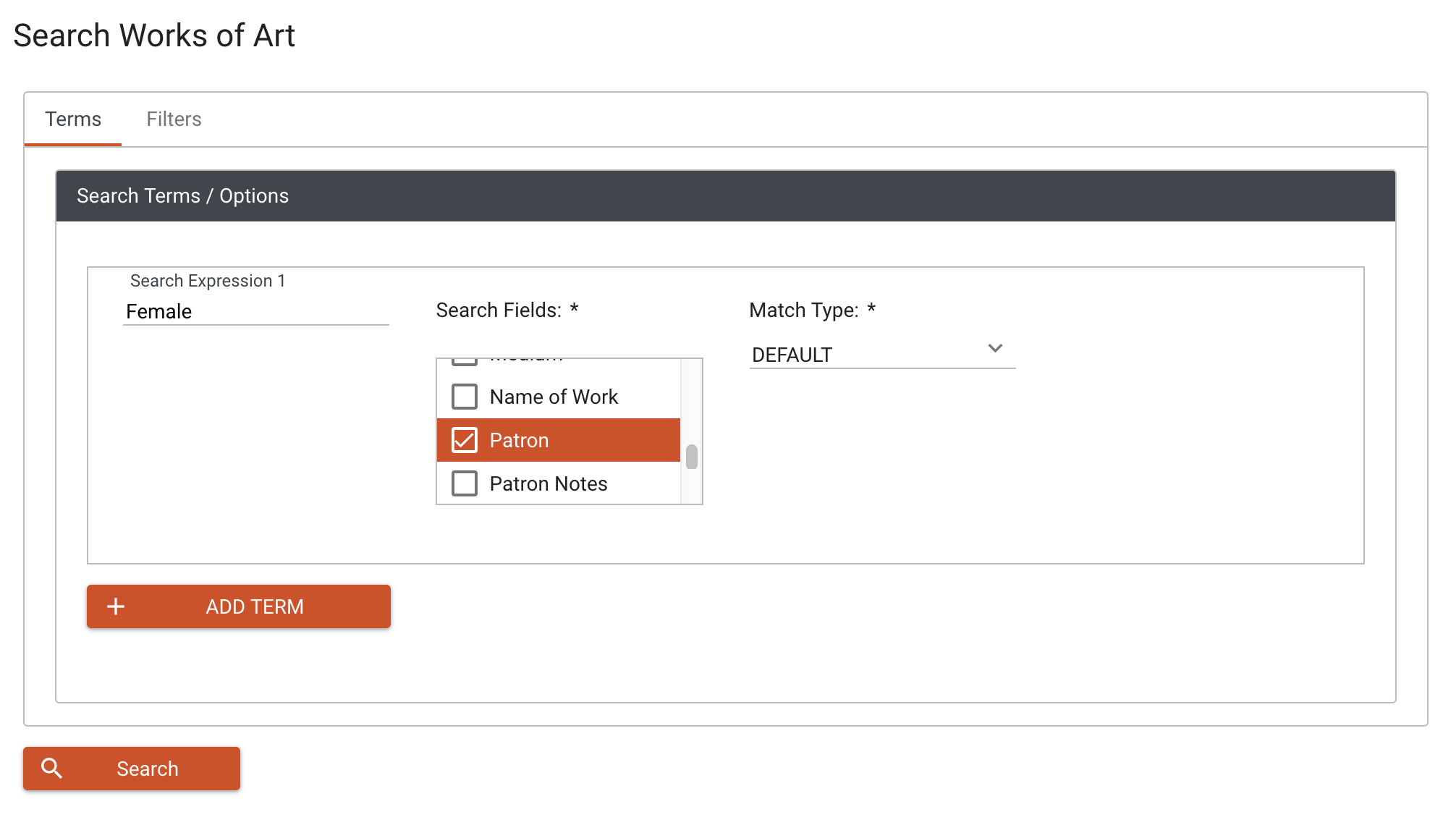 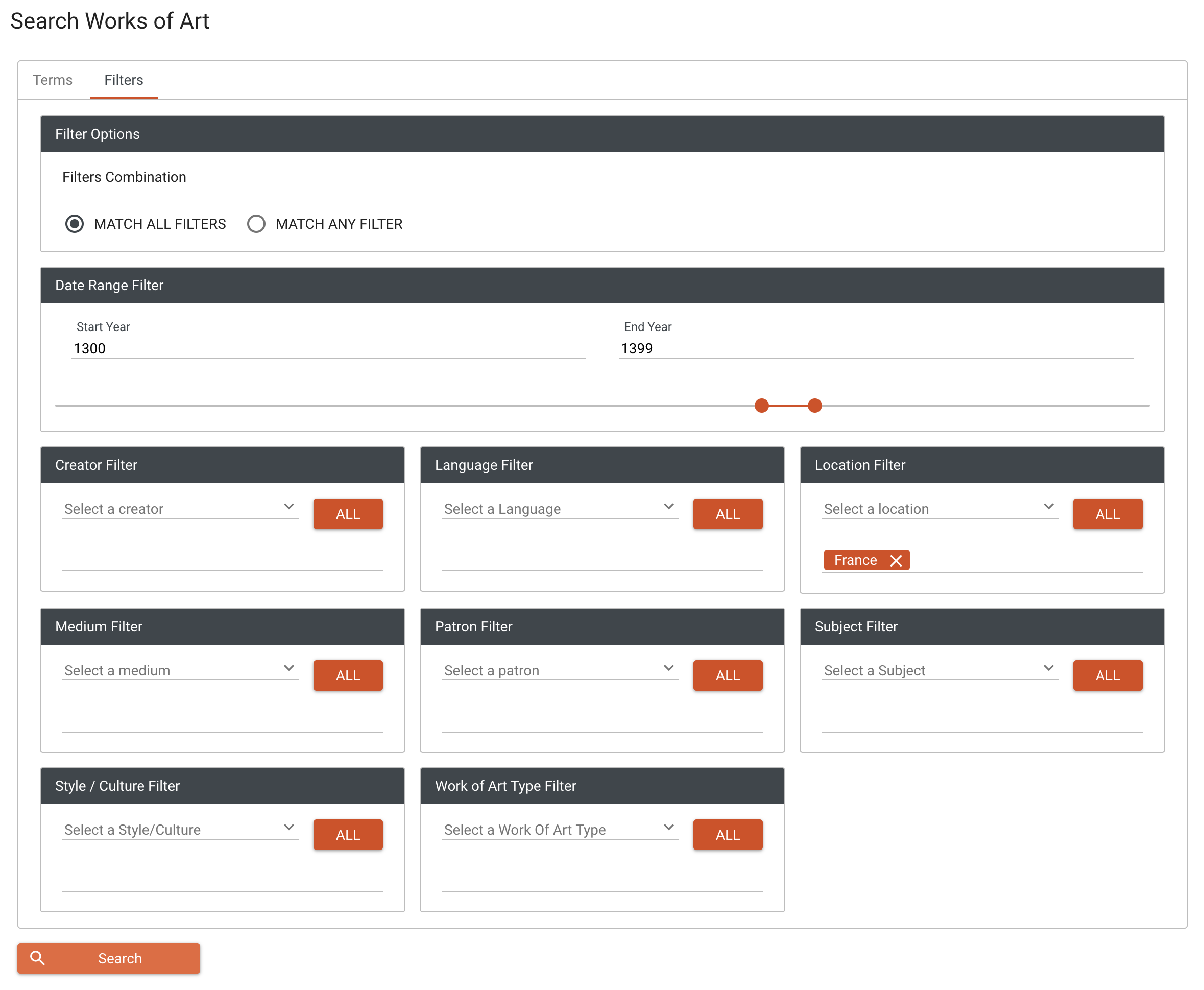 This search should yield 27 examples, where a female patron is connected to the 14th century work made in any part of France.

*In results, please note that work of art records without images usually indicate the Main record.

As you search for patrons in the new Index of Medieval Art database, bear in mind that visual representations of patrons are found in the Subject field. To find images of patrons, you can browse or search the Subject field with the keyword “Donor.” To read more about medieval patronage practices in general, you might find the Index’s 2013 conference publication Patronage, Power, and Agency in Medieval Art of interest. Enjoy refining your searches and browsing the range of patrons we record in the Index! And please remember that we are always happy to have your feedback. Get in touch with us at theindex@princeton.edu.

The Iconography of Darkness at the Crucifixion

Matthew’s Gospel tells us that, at the moment Christ died, darkness swept over the land for three hours (Matthew 27:45). The foreboding skies at Christ’s crucifixion were also recorded in Luke 23:44-45 and Mark 15:33. Mark’s account, thought to have been written around the year 70 CE, was likely the earliest.[1] Some scholars have reasoned that this midday phenomenon was an actual eclipse, because the passage in Luke reports that darkness fell over the land when “the sun was eclipsed” (“τοῦ ἡλίου ἐκλιπόντος”) (Luke 23:45). However, the passage is usually translated “the sun was darkened.” The verb is in the passive voice, as is the verb “ἐσκοτίσθη” used in other versions of the Greek text, and both words can mean “was darkened” or “was obscured.”[2] No matter how we may interpret the words relating the phenomenon, and no matter whether it is possible to attribute the darkness thus described to a real astronomical event, scriptural hours of daytime darkness over Golgotha presented an iconographic opportunity to medieval artists depicting the Crucifixion.

In manuscripts and painted works of art that aimed to depict the event, color was frequently exploited to illustrate darkness and to create a dramatic setting. Across media, the celestial bodies of the sun and the moon were incorporated into the skies above the crucifixion, not only to signal darkness at daytime but also to imbue the scenes with a rich cosmological significance.

An especially early example appears in the Syriac Rabbula Gospels from the late sixth century. In this manuscript, the Crucifixion includes a partly eclipsed Sun and a Moon with a face against a remarkably light sky; a sliver of shaded pigment at the top suggests darkness (Figure 1). From antiquity, the sun and moon were associated with power. In early medieval crucifixion scenes they represented God’s cosmic anger at the death of Christ.[3] Throughout the Middle Ages, personifications of the Sun and Moon became regular characters at the Crucifixion, positioned as sorrowful figures mourning Christ’s death. The placement of the Sun and Moon respectively at the right and left arms of the cross came to be read typologically as the Old and New Testaments.[4] After about 850, they could also be seen as allegorical representations of Church and Synagogue.[5] 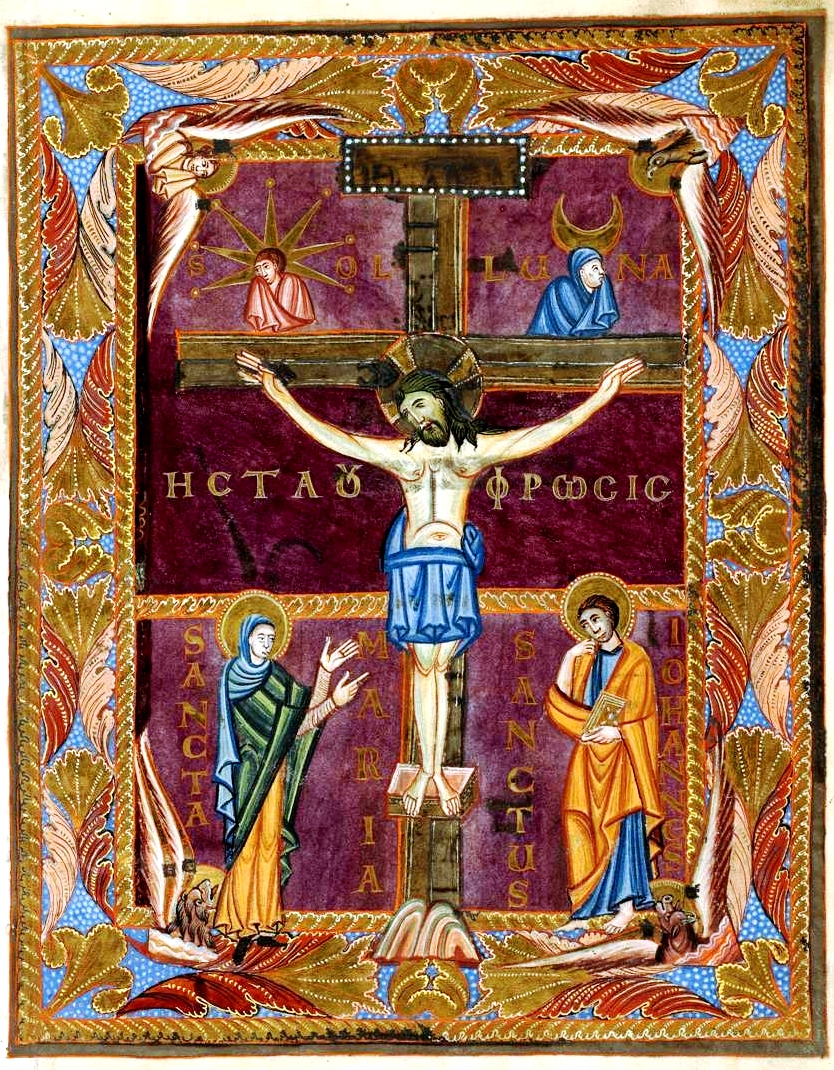 The Ottonian Sacramentary of Henry II sets the Crucifixion scene against a deep purple background, a striking hue used to set a somber mood and suggest darkness (Figure 2). Busts of the personifications Sun and Moon sit on the arms of the cross. The Sun, labeled SOL and sporting a rayed headpiece, and the veiled Moon, labeled LUNA, both turn away from the scene and weep into their draped hands. The strong background color effectively conveys the darkness of this scene emphasized by the dramatic gestures of the Sun and Moon.

Medieval artists sometimes set the same iconographic features within a flattened space of gold or patterned backgrounds. A leaf from the Potocki Psalter, made in Paris in the mid-13th century, sets the Crucifixion against a gold background (Figure 3). Christ is flanked above by the sun and moon and below by the Virgin Mary and the Evangelist John. Within this composition, the three main figures hover between time and space, darkness suggested only by the presence of the partly obscured sun and the crescent moon. 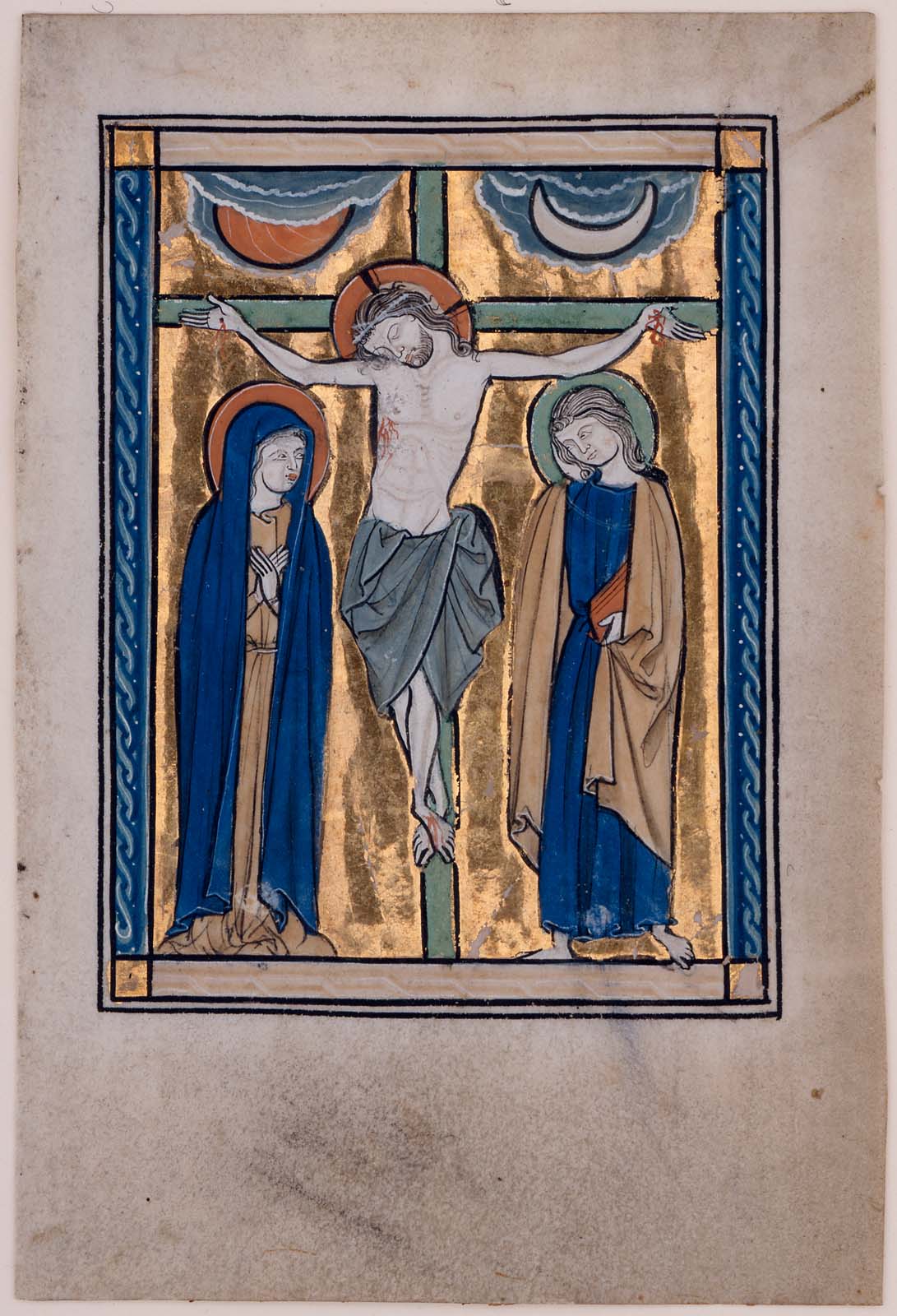 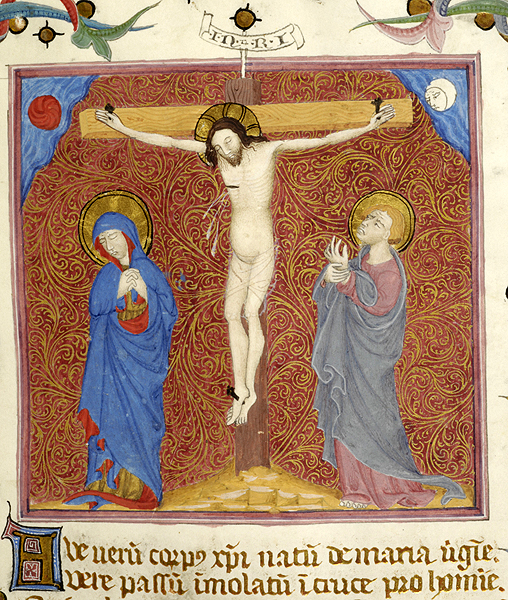 Similarly, in a Crucifixion scene painted around 1400 to 1410 in a Register of Coiners and Minters from Avignon, a richly patterned background of gold scrolls avoids any illusion of a dim sky (Figure 4). The red sun and the moon’s countenance in the upper corners of the miniature are the only clues that the ornamental ground is actually simulated “darkness.” In both miniatures, decorative and luminous backgrounds highlight the central features of the scene so that the Crucifixion image becomes a place of mediation, the background “darkness” metaphorically positioned between an earthly space and a shift in the cosmos at the moment of Christ’s death.

Images of darkness at the Crucifixion can be found in the Index database by any of several possible search strategies. One method is to perform an advanced search using the keyword “Crucifixion” while filtering with the subject “Sun and Moon.” This search returns over 380 results. Executing the search again with the subject “Personification: Sun and Moon” returns around 220 examples in a variety of media, including ivory plaques, glyptics, and frescoes. “Personification: Sun and Moon” is the subject used by the Index for records concerning works on which both celestial bodies have facial features. Using words like “stars” or “starry,” background elements that can also suggest a dark sky may be recorded in the Index’s descriptions of such works. 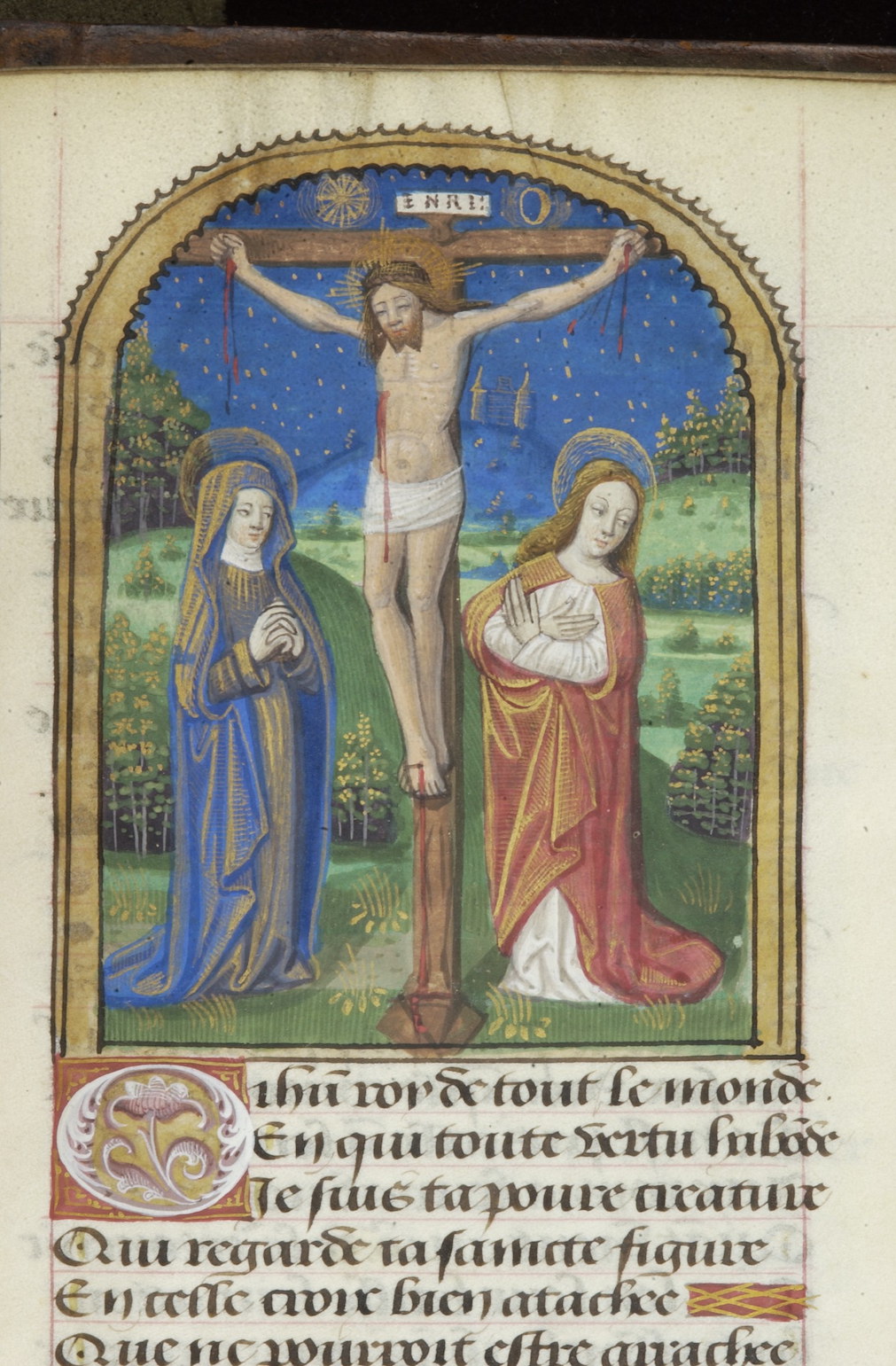 With the advent of the Index of Medieval Art’s new database, thumbnail images are now visible with search results, allowing the researcher to review works of art at a glance. Thus, a researcher looking into images of the Crucifixion will be able to notice the gradual change in the later medieval period in the West, when images of the Crucifixion began to represent the three-hour darkness as a true night sky. In a Book of Hours made in Paris about 1490, a soft pattern of gold stars with the sun and moon dot a dark blue sky to create the illusion of evening (Figure 5). Other Crucifixion scenes that a researcher may notice while thumbnail browsing show cloudy, dark, and emotive skies that convey darkness without the sun or moon. These atmospheric scenes offer a remarkable and naturalistic, if not peaceful, departure from the earlier ones with their grief-stricken personifications of the Sun and Moon.

The starry night sky casts a familiar source of light over a recognizable scene, and these astronomical bodies inspired fascination in medieval minds still forming theories about what those bodies might actually be. Nevertheless, the symbols of the Sun and Moon, while signaling darkness and the passage of time, also imparted emotional weight, persisting in iconography not only to adhere to scriptural tradition, but also to emphasize the significance of Christ’s death.

Nickel, Helmut. “The Sun, the Moon, and an Eclipse: Observations on The Crucifixion with the Virgin and Saint John, by Hendrick Ter Brugghen.” Metropolitan Museum Journal 42 (2007): 121–24.

[1] The Gospels report three other supernatural events that occurred during the Crucifixion: the temple veil was split in two; various earthquakes shook the land; and the souls of the dead rose from their graves. See related subjects in the Index of Medieval Art: Christ: Crucifixion, Earthquake; Christ: Crucifixion, Resurrection of Dead, and Veil of Temple: rending.