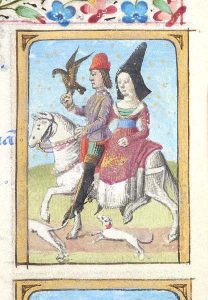 While the other months of the year had specific harvesting tasks associated with them, the relative ease of May was a welcome relief from the daily toil that dominated medieval life. May occupations are traditionally represented as more joyous, particularly in Books of Hours and Psalters. The Index database records over 180 scenes for May in manuscripts, and a little over half of them use the occupation of the male falconer on horseback (see related subjects: Month, Occupation: May; Figure, Male: Falconer; Horseman: Falconer; and Scene, Sports and Games: Falconer). Falconry, or Hawking, was a favorite medieval sport enjoyed especially at the beginning of spring. These hunting birds were prized for their agility and loyalty to their masters. Another popular scene depicting May is a pair of lovers on horseback, occasionally with a bird perching on the man’s wrist. This scene of a riding couple was a favored occupation and signaled the readiness for new courtships. Other instances of May scenes include figures holding flowers or wreaths, couples promenading, and other verdant scenes of courtship, whether amid blooms in grassy gardens or even on boats (see related subject: Scene, Secular: Courting).

Gemini shown as an embracing couple behind a low wattle fence. In left margin of the May Calendar page in a Book of Hours. New York Public Library, MA 40, fol. 6v (Rouen, c. 1480)

The zodiac sign that commences in May is Gemini, traditionally represented by a pair of figures—Gemini being Latin for “twins”—that are linked to their astrological appearance in the sky (see related subjects: Zodiac Sign: Gemini and Constellation: Gemini). The representations of Gemini can also be divided into a few main categories. A sample of about 80 French medieval manuscripts reveals that the most popular Gemini sign was the embracing nude couple, with far fewer of them appearing clothed. Often the couple’s bodies are masked by parts of the landscape or are cropped by a frame. Nude twins are the second most common Gemini sign and are usually depicted as two men embracing or wrestling. Sometimes the twins will appear as confronted soldiers with mirrored weapons and gear. The twin variations in Gemini also include pairs with crossed legs, conjoined bodies, or even one figure with two heads.

The subjects for months and zodiac signs are most prevalent in manuscripts, but they are also well-represented in sculpture such as the famous façades at Chartres and Vézelay. In 2007, information on all zodiac and occupation subjects classified by the Index was collected and published with Penn State University Press as Time in the Medieval World: Occupations of the Months and Signs of the Zodiac in the Index of Christian Art. This book has been hailed as a “lavishly illustrated” and “functional research tool” for studying the subject of the medieval measuring of time.

Hourihane, C., ed. Time in the Medieval World: Occupations of the Months and Signs of the Zodiac in the Index of Christian Art. University Park, PA: Penn State University Press, 2007. 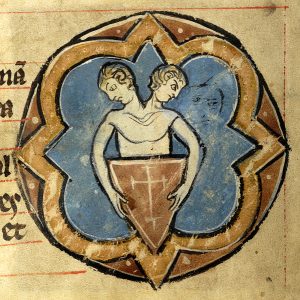