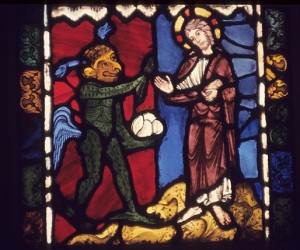 The model during Lent, the forty days of reflection and restraint before Easter, is Christ in the desert overcoming temptation. According to the Gospel writers Matthew, Mark, and Luke, Christ wandered alone in the Judean desert for forty days immediately following his baptism and before starting his public ministry. Satan first tempted Christ in the desert to turn stones into bread. Christ responded by quoting Deuteronomy 8:3, “It is written, man shall not live by bread alone…”. The Gospels describe two other attempts of temptation to win over both Christ’s pride and power. On the second temptation and with a dramatic setting change, Satan tested Christ to act independently from God and use his divine powers to jump from the height of the temple in Jerusalem –  Christ firmly refused. Finally, Satan made a grand offer to Christ; to bask in the glory of all the kingdoms of the world if he would give up his mission and be partners with Satan, to which Christ replied, “Get thee hence.” 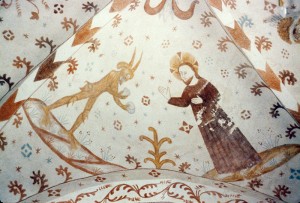 By the time of Gregory the Great, Pope from 590-604 CE, medieval Christians were expected to observe Lent by emulating these desert trials of Christ by fasting from animal products, remaining diligent in prayer, and giving alms to the poor. Typically, one meal per day was consumed during Lent; save the worship day of Sunday, observers were to resist all carnal attractions. The strict prohibitions during Lent required endurance from believers and tested their own degree of devotion. 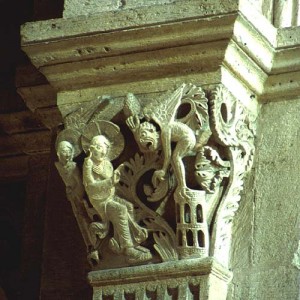 The Index classifies the Temptation episodes in three major divisions according to the number of times the devil tried to seduce Christ. Currently, the database records the most scenes for “Christ: Temptation, 1st,” the temptation for hunger, and works of art are mostly executed in manuscript illumination, but also stained glass, fresco, and sculpture, as shown. There is also a general subject category for “Christ: Temptation” which is used to describe scenes where Christ and Satan are facing each other in an unknown part of the narrative or when all three Temptations are depicted in one scene as in the south vault mosaic at San Marco in Venice . “Christ: in Wilderness” is often a subsequent subject heading applied to the Temptation scenes as well as, “Christ: ministered to by Angels.” The latter records a specific part in the narrative when Christ is kept alive in the desert by angels following the departure of the devil. Lent, coming from the Old English word “lengthening,” is the transitional time in the church calendar and for the seasons. 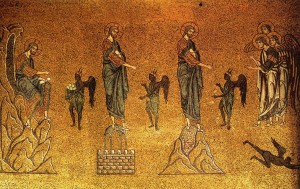