Elections in the Middle Ages 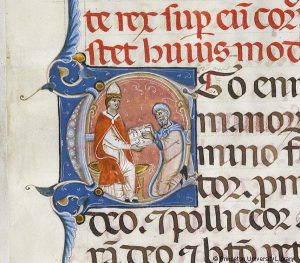 The governing offices of medieval church and state – such as emperor, king, pope, archbishop, abbot, mayor, and so on – were often filled by election, in accordance with public and canon law. Often, election by a voting body facilitated the peaceful transference of power, even if such decisions also considered the privileges of birth and rank, as well as the requirements of the church.

Under canon law, medieval people were guaranteed certain human rights, including welfare rights, the right of certain classes to vote, and religious liberty (Helmholz 3). Canonists supported the free exercise of these rights, as they believed them to be supported by biblical tradition. Common law, or ius commune, upheld that a right order of government on earth was based in natural law and the upholding of these God-given rights. In effect, common law and canon law were seen as linked systems, to be enforced at the highest level to promote God’s plan for the world. Voting rights were recognized under both systems, so that secular elections evolved from the system put in place by medieval canonists for choosing offices within the church (Helmholz 6).

Medieval elections took place primarily in three contexts, ecclesiastical, secular and academic, but detailed evidence about them is scarce. Voting in both ecclesiastical and secular elections could follow one of four main procedures: overseen by an external authority with no direct interest in the election; by indirect election, in which electors named a proxy to select the officials; by lot; and by ballot (Uckelman and Uckelman 3). In contrast to most modern practice, electors had a limited choice, and the outcome of an election was always subject to the judgment of their superiors. Medieval law also ruled that all of the electors had to meet at the same time in the same place, whether or not the actual voting was done in secret. This was to mimic the meeting of the apostles at Pentecost and to wait for divine guidance before voting (Helmholz 8). 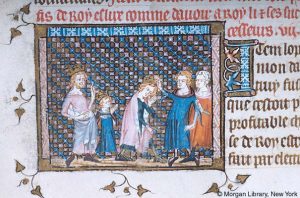 For some medieval rulers, the election, crowning, and anointing of Old Testament kings proved to be an excellent model for legitimizing their rule. Biblical tradition not only provided a justification for absolute reign, it also ensured that the church remained authoritative over secular rulers. In principle, the selection of a medieval monarch was based on both elective and hereditary elements, but from the tenth century in northern and central Europe, political and social trends steered toward hereditary succession over an elective monarchy (Nelson 183). This trend is exemplified in a French manuscript titled the Avis aus Roys, or royal advice book, dating to the mid-fourteenth century and possibly made for Louis, Duc d’Anjou (1339-1385). This book highlights the benefits of adhering to hereditary royal succession, which was widely seen as a more secure and manageable transference of power than other means of selecting a ruler.

The Church’s rules for filling ecclesiastical offices presented a paradox, as they strongly favored a mix of election and hierarchy. Before the papal bull In nomine Domini of 1059, which included an election decree, the pope’s successor was most often named by the incumbent pope or by secular rulers (Larson 151). Reforms put in place over the course of the twelfth and thirteenth centuries resulted in the creation of the first papal conclave (1276) and College of Cardinals, the familiar process for electing the pope that is still in practice today. Below the pope were elected cardinals, archbishops, bishops, and other local offices for priests and deacons. Episodes of their ritual consecration, ordination, vesting, installation, and taking orders feature prominently in the Index subject headings. Another elective office common in the Middle Ages was that of abbot or abbess of a monastery. 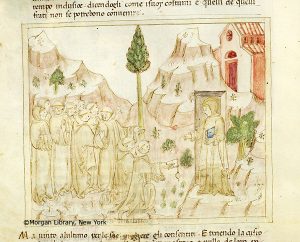 Among the more numerous depictions of Benedict of Montecassino delivering rule to monks is a rare episode in an Italian manuscript depicting him chosen as abbot. In this Vita Benedicti, dating to the mid-fifteenth century, a miniature depicts a group of monks presenting a letter, stamped with a dangling wax seal, to the new abbot-elect standing in the doorway of his mountain monastery.

Barzel, Yoram, and Edgar Kiser. “The development and decline of medieval voting institutions: A comparison of England and France.” Economic Inquiry 35, no. 2 (1997): 244-60.

Larson, Atria. “Popes and Canon Law.” In A Companion to the Medieval Papacy: Growth of an Ideology and Institution, edited by Atria Larson and Keith Sisson, 135-37. Leiden: Brill, 2016.