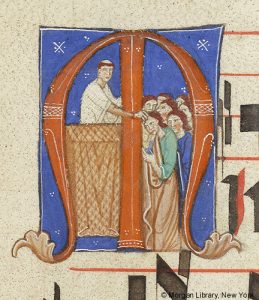 The medieval church season of Lent officially opened with Ash Wednesday, the Wednesday after Quinquagesima Sunday (the period of fifty days before Easter). The observance of Ash Wednesday marked forty fast days before Easter, not counting Sundays. During Lent, medieval Christians were forbidden to consume meat, eggs, dairy and animal fats, except on the permitted Sundays which were viewed as a “mini-Easter.” By adding a level of restraint to their daily lives, medieval Christians fulfilled a call for penance, which was especially important during the Lenten season. On Ash Wednesday, in the Middle Ages as it is now, a celebration of Mass incorporated the distribution of blessed ashes on the foreheads of believers. When dispensing the ashes, the celebrant reminds those receiving it that “as you are from dust, from dust you shall return” (based on Genesis 3:19). 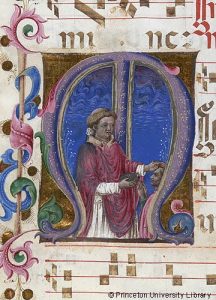 The Index records three examples in manuscript illumination of the distribution of ashes. Each begins a part of a liturgical book read for this feast: a Gradual fragment in Princeton University Library (Kane 13), a Gradual in the Morgan Library (M.933), and a Missal in the Walters Art Museum (W.174). The Morgan and Princeton Graduals begin with the same Latin Introit, “Misereris omnium domine et nichil odisti eorum…” (Thou hast mercy upon all, O Lord, and hatest nothing…). It is interesting to note that the subject heading “Scene, Liturgical: Distribution of Ashes” used by the Index now was not in the original card file but was developed sometime during the last twenty years when post-1400 material was incorporated into the Index. 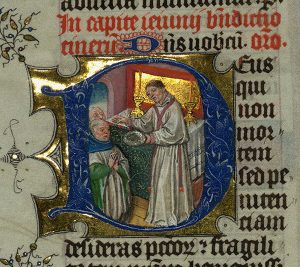