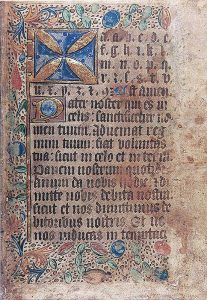 It’s back to school time! Modern children enjoy the luxury of a school year that reflects an agrarian society, allowing time off during the summer months when all available hands were put to work in the fields. During the Middle Ages, many students lived, learned, and worked at home year round. 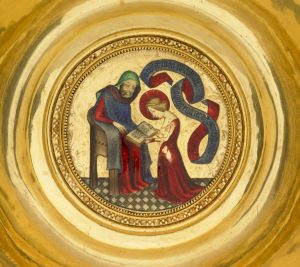 They learned how to be good citizens, and how to interact in society. They were taught basic Christian tenets and prayers. Boys learned a skill, following the family business, be it farming, blacksmithing, stone carving or brewing. Girls were taught how to run a household and the rudiments of the family business, to assist a future husband or possibly to take over business herself. In wealthier households, children learned similar life skills, but they had the advantage of becoming literate.  A number of manuscripts exist that include the alphabet, Pater Noster, the credo, and familiar prayers as part of a book of hours. Under the guidance of parents, these books helped to form literate, religious offspring (Illus. 1). 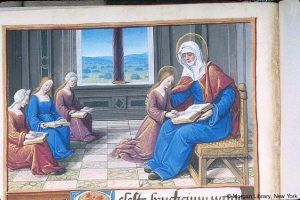 Medieval art provides insights into the education of both boys and girls. Girls are shown at home, being individually tutored—as in the image of Agnes of Rome reading an open book before a seated tutor (Illus. 2)—or in small groups such as the one shown with the Virgin Mary and her mother (Illus. 3). Notably each of the girls has her own book, signaling a household of some wealth. Boys are shown at schools away from home. Jesus may be seen as a child carrying a paddle-shaped tablet with a panel of wax, slate, or parchment (Illus. 4). He is led by his mother, raising a scourge in her left hand—a view of the future, or merely an indicator of a boy who did not want to go to school? They walk toward an open-air building where the tutor holds an open book, showing the pages to several students. Other students study their own books, and several, including Jesus, wear what appear to be pen cases hanging from their belts. In another illustration, a single boy stands, perhaps reciting before the tutor, the rest of the class waiting their turns, some diligently studying open books, while one balances a book on his head (Illus. 5). 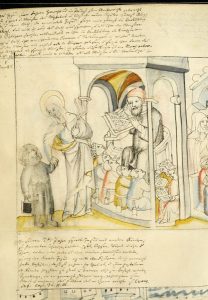 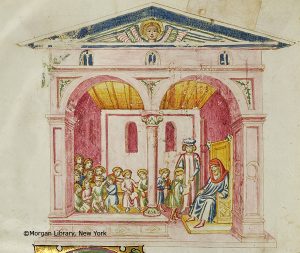 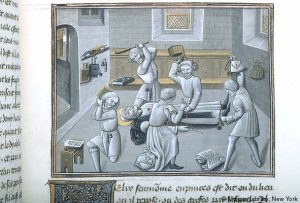 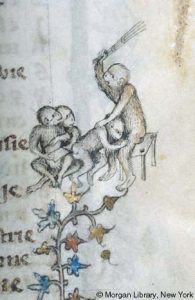 Not all were model students. Felix of Nola, whose story appears in the Golden Legend, is said to have been stabbed to death with styluses. The image here shows Felix lying on the floor of the school room, surrounded by students, one indeed holding a bloody stylus (Illus. 6). Aside from the goriness of the picture, it does give a sense of a school room. One basket, likely containing lunch, hangs on the wall while another is used as a weapon. A few books are visible, one open on a desk next to an inkpot and pen—likely a student’s blank book of either parchment or less expensive paper for recording lessons. One tablet is used as a weapon; another hangs on the wall. The same goes for satchels. A couple of students wear a pen case and ink pot on their belts; others hang on the wall. 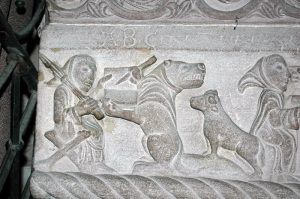 Artists used marginal areas of a work of art to depict unusual ideas about a variety of topics, including education. A misbehaving monkey is whipped by his monkey tutor while two other monkeys look on, one with a sheet of paper or parchment on its lap (Illus. 7). A tutor holds withes in one hand and a tablet with the other while a grinning dog writes on the tablet, a stylus gripped in its right forepaw (Illus. 8). Above them are the letters ABC. Finally, a fox wearing a scholar’s cap, raising a baton with his right forepaw, teaches a flock of geese the art of singing. They all stand at a lectern with a book open perhaps to the text they are to sing (Illus. 9). 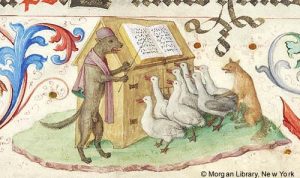