Iconography and the Role of Wisdom

The personification of Wisdom in medieval art is usually grouped with other virtues, such as Justice, Hope, Prudence, Chastity, Poverty, Courage and Fortitude. While she works in communion with these sisters, she also performs her own distinct role. As the story goes, Wisdom was created by God before the world existed and is therefore in the position to offer humanity knowledge that will lead to its salvation. When Wisdom speaks in the Book of Proverbs, it is often to highlight her own importance and power. She calls herself a font of knowledge and a righteous helper who will reward those who follow her instructions. Wisdom says,

“By me kings reign and lawgivers decree just things. By me princes rule and the mighty decree justice. I love them that love me, and they that in the morning early watch for me shall find me. With me are riches and glory, glorious riches and justice….” [Proverbs 8.15–18 (Douay-Rheims Bible)] 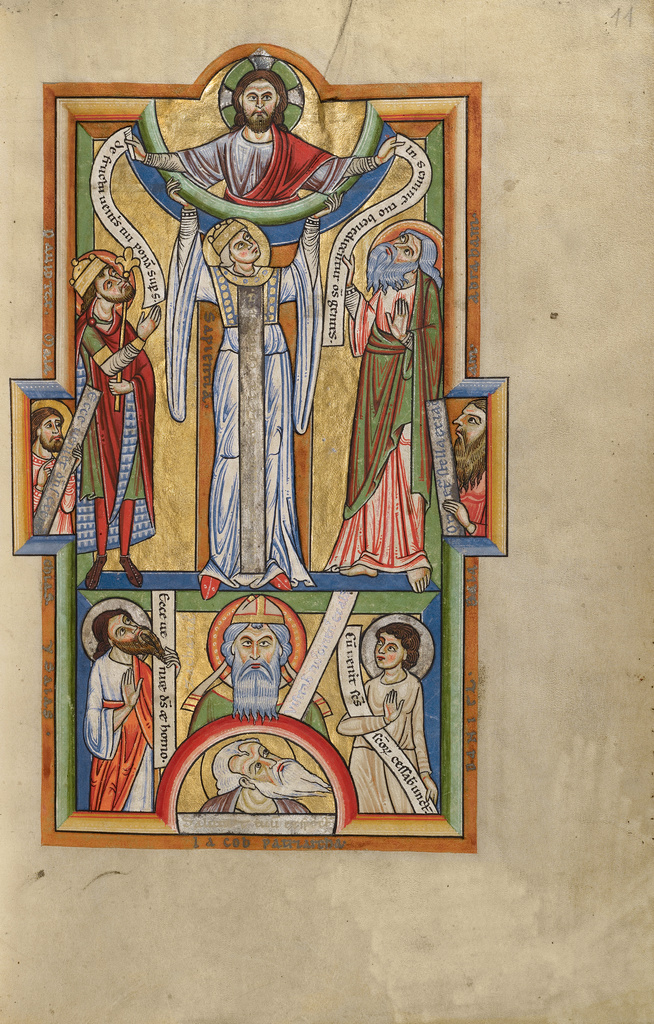 This reward of Wisdom manifests in two ways: not only does she assist in saving the souls of those who heed her message, but she also has the authority to grant earthly power to individual rulers. The Index of Medieval Art records several scenes in biblical and secular narratives in which the virtue of Wisdom is a central character. Some relevant subjects in the Index include Christ: praising God’s Wisdom; Personification: Holy Wisdom; Personification: Celestial Beatitudes; and Holy Ghost: Gifts; and in narratives, Pèlerinage: Scene, Wisdom with Aristotle; Confessio Amantis: Scene, Darius, Sultan of Persia, seeking Wisdom, and De Consolatione Philosophiae: Scene, Wisdom showing Boethius Vision of Heaven.

In some Semitic languages, the word we translate as wisdom literally meant to restrain oneself from evil, suggesting a conscious desire to avoid sin. Thus, a sinful individual cannot approach Wisdom, as illustrated in a Romanesque miniature on folio 11r in the Stammheim Missal made in Hildesheim [Los Angeles, J. Paul Getty Museum, Ms. 64 (97.MG.21)]. Flanked by David and Abraham, a crowned Wisdom (Sapientia) is positioned beneath the half figure of Christ. Here she is in direct contact with the divine as she supports with raised hands the arc of heaven, the traditional separator of realms. In a sense, she has become a gatekeeper and mediator for Christ. Surrounded by earthly men, including Zechariah and Patriarch Jacob, Wisdom can also be seen as a kind of “ladder” to heaven, since her upright body forms an important link to the promise of salvation. 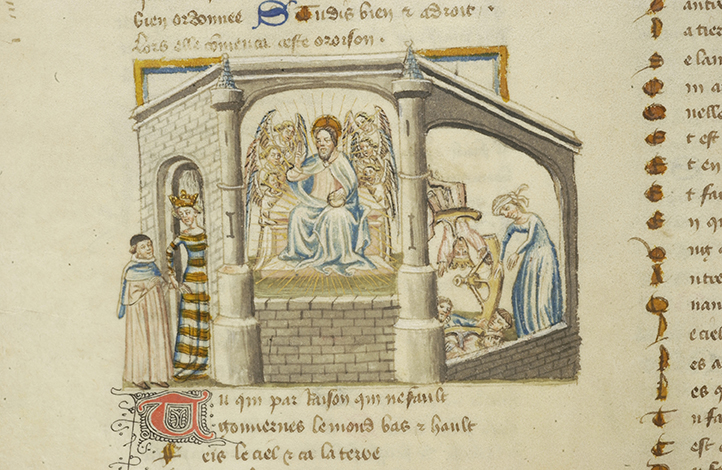 Wisdom’s spiritual authority is exemplified by a scene on folio 239v of the De consolatione philosophiae of Boethius, which shows her leading the Roman philosopher to God’s throne (New York, Morgan Library, M.396). They enter through a side door of the throne room, positioning Wisdom once again as the route to the divine.

However, Wisdom also bore earthly authority, mentoring influential individuals such as Solomon, the Old Testament king of Israel and the traditional author of the biblical Book of Wisdom. This relationship is illustrated within an initial P (New York, Morgan Library, M.791). Against an ethereal gold burnished background, a veiled Wisdom crowns Solomon as a sign that she is at the root of his authority. By Wisdom—and by way of Wisdom—Solomon enacts what is so eloquently echoed in the verse of Proverbs: he will enjoy elevated status owing to the receipt of spiritual gifts; his reign is received in righteousness; and his rule is just. 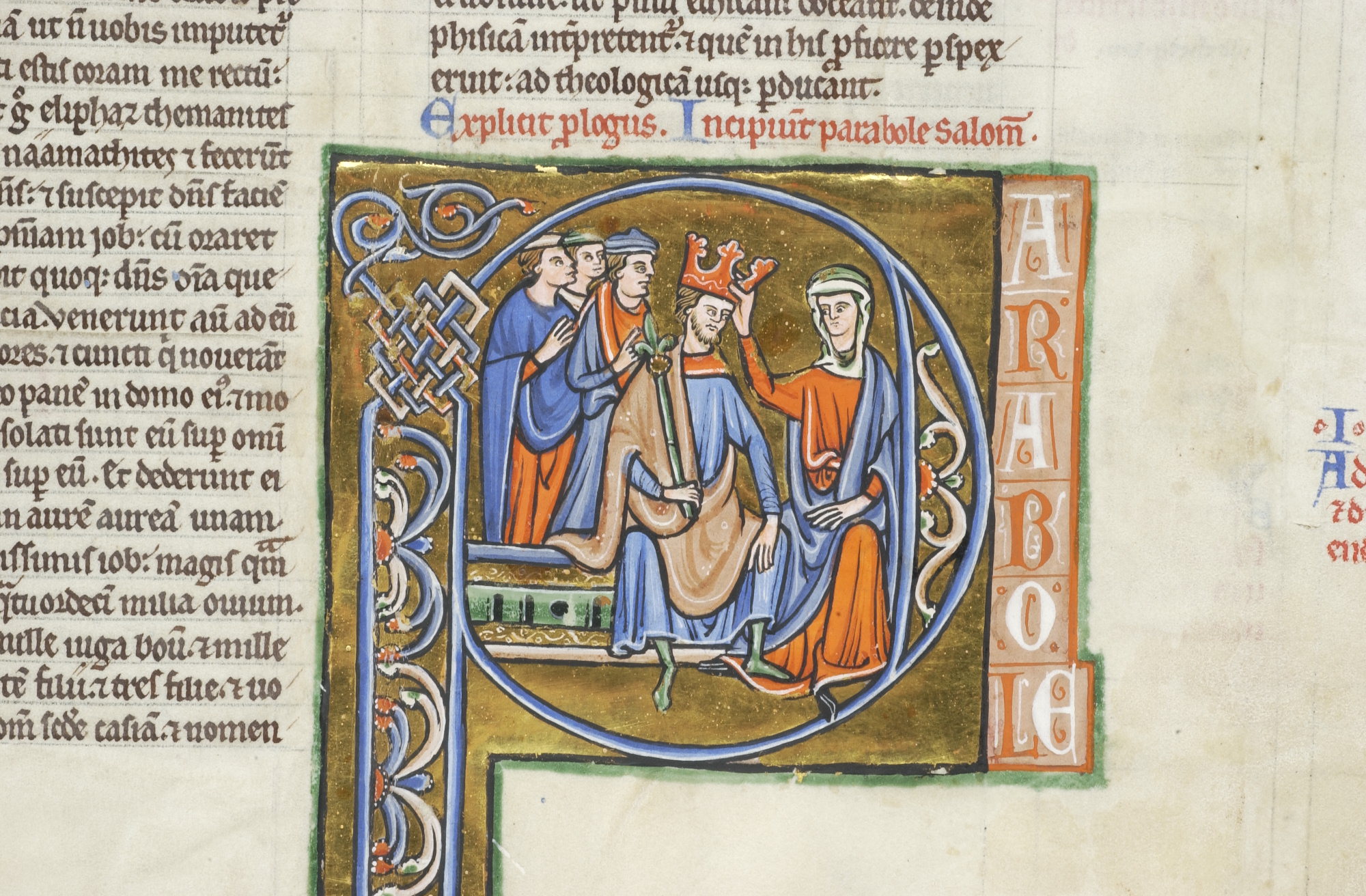 This guest blog post was written by Rachel Dutaud, a summer student assistant at the Index of Medieval Art and a recent graduate in Art History and Ancient History from the University of St. Andrews. Over the 2017-18 academic year, Rachel will be working toward her MA degree in Archives & Records Management at University College Dublin. Her interests are medieval art history, iconography of female rulers, classicism, and archives.